Ice, frozen (solid) water, can appear in several ways in the atmosphere. As ice precipitation on the ground we see 2 main forms, snow and hail. Snow is composed of ice crystals that aggregate, in clouds, to form snow flakes. Hail is an aggregate of ice particles of which different types can be identified.

Interest in ice crystals began in 1611 when Johannes Kepler published a short work 'On the Six-Cornered Snowflake'. He wondered why snow crystals showed a six-fold symmetry. He thought that the hexagonal packing of spheres had something to do with the morphology of snow crystals. He could not pursue this investigation as he would have needed X-ray crystallography that was not invented for another 300 years. In 1635 a mathematician René Descates published a description of snow crystals he had made by eye. But it was not until Robert Hooke in 1665, using an early microscope, made and published a volume of crystal drawings that their complexity and symmetry was revealed.

Probably the first to combine the use of a microscope and photography was a farmer from Vermont. Wilson Bentley (1865 - 1931) spent much of his winter lifetime finding crystals and taking over 5000 photographs. Some of these were published, just before he died, in Snow Crystals containing some 2000 images 1. In 1954 Ukichiro Nakaya, a nuclear physicist, identified and catalogued many of the different types of frozen precipitation. He also grew snow crystals in the laboratory, describing the morphology of crystals grown under different controlled conditions, to gain an understanding of snow crystal formation. Ken Libbrecht has done much to further the interest in ice crystals in his website 2.

Forms of ice precipitation are recorded at most weather stations. But it is also something you can do without the need of any expensive equipment, so read on. 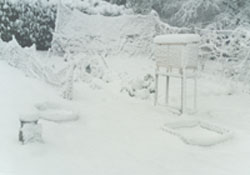 Snow flakes are familiar to most people. For a day of snow it is only necessary to observe a single flake; it would be extremely rare just to see one, but you can often see just a few in during or, more likely, just after showers of snow pellets (see below). Ice crystal aggregations falling from clouds normally melt before they reach the ground and arrive as rain. But when the freezing level is close to the ground, say below 1000 ft (300 m), they do not melt and fall as snow. Usually the air temperature in a Stevenson screen needs to be below about 3C, it would be very rare to fall when above 4C. Sometimes snow arrives in a mixture with rain, this is called sleet in Britain (in the United States for example sleet is ice pellet precipitation). Snow flakes can vary in size from a few millimetres to 2 to 3 centimetres. A good place to observe falling snowflakes is inside a parked car on a cold windscreen (not travelling on the road of course). Close-up photographs can be taken in this way but the temperature has to be really low. In Britain the snowflakes are usually melting when they reach the ground and their structure largely spoiled.

Snow is recorded as lying snow when 50% of more of the ground is covered with snow. No account is taken of bare patches under trees, roads, rivers, lakes or rock outcrops. At climate weather stations particular note is made of any snow at the observation hour oft 0900 GMT. So you may see in station records 3 days of lying snow in February; this means it was lying at more than 50% cover at 0900 GMT. If it snows later in the day and melts before next morning it does not count; if it lasts until 0900 GMT next day it does.

Snow depth is recorded, also at 0900 GMT, where it is lying evenly in several places and the mean taken. Snow depths are reported in centimetres. Each day that snow remains on the ground the depth is recorded. As fallen snow compacts, thaws or freeze dries (sublimates), ice changing directly to water vapour without melting first) measurement of the lying snow is no indication of that fallen in the past 24 hours. In countries where a lot more snow falls than in Britain, and particularly over several days, additional amounts of snow are measured on a snow board. I use one myself. At each observation the snow board is cleared of snow; the next measurement on the board gives the depth fallen since the last observation.

Definition of rates of snow fall

Rates of accumulation assume that there is no thawing taking place.

Blizzard: There is a strict definition of a blizzard. Wind speed should be Beaufort force 7 (mean speed 35 mph, or more). Visibility of less than 0.5 km and a duration of 3 hours, or more, may be added requirements.

Hail can simply be recorded as one of two types based on size. Hail of 5 mm, or more, is large hail, if less than 5 mm small hail. But it is much more interesting to identify and classify the different types of hail.

A day of hail is a day (midnight to midnight GMT in the UK) when ice precipitation (except for snow or sleet) is observed falling at the weather station.

Note: Falls of any type of hail, including snow grains or snow pellets, should not be recorded as a day of snow (British Met Office confirmed). You may see both hail and snow on the same day (frequently snow pellets and snow are seen here) in which case both are recorded.

Hailstones can start melting straight away. So always measure quickly (best with with calipers) or compare with something (pen, pencil or coin) that you can measure accurately later. Some people like to compare the size with familiar objects such as peas, marbles or eggs. I don't like that approach very much, after all peas, marbles and eggs all come in different sizes, but it is better than nothing. The hailstones could be a record so take a photograph and, if possible, put some in the freezer!

Note: When reporting hailstones, the higher numbered code always takes precedence, if more than one category is observed, or there are different falls during the day. Always make a note of the type and time that it fell because it is of great interest.

Definition of rates of hail fall

Weather stations record and can report hail according to this code:

1: Wilson A. Bentley The Snowflake Man