Winter salt gritting of roads provides a habitat for a sea shore plant. 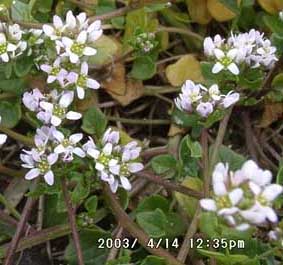 In full flower on 16th April 2003 was Llwylys Denmarc the early, or ivy-leaved scurvygrass Cochleria danica usually found on sandy and rocky shores, walls and banks near the sea. A low spreading annual the flowers 4 - 5 mm diameter have white, or pale mauve petals in bright sunshine, and are largely self pollinating. But this specimen was not growing near the sea, but on the verge alongside the A5025 in Llansadwrn, between Four Crosses and Pentraeth. 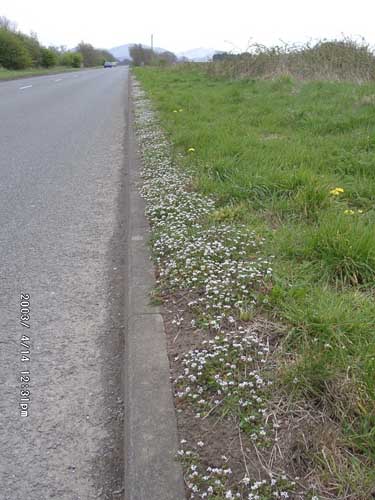 Botanically known as a halophyte it is able to grow where it is really salty and others cannot. It has taken advantage of the habitat made alongside roads by frequent heavy salting during the winter. This was the largest patch I could find, some 40 m long, on the road between the Four Crosses and Pensarn, near Amlwch. Most plants are found on stretches of main road where verges are treated with herbicide during the summer and salt in the winter. The stretch from Four Crosses to Pentraeth was heavily treated with herbicide in 2002. This gives the plant the additional opportunity to grow in the strip free of competition close to the curb. Other species cannot tolerate the concentrations of salt. 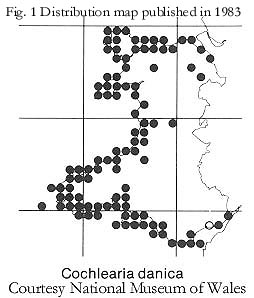 Previously confined to a narrow strip around the coast subject to salt spray , a few plants used to be found inland growing on the ballast of railway lines mainly in the south Midlands. The map (Fig.1 ) shows it's distribution around the coast of Wales in 1983. But in recent years it has found it's way along the main road network. There are some plants established on the A55 on the section of road built northwards from the Britannia Bridge. Opened for vehicular traffic, following the fire that almost destroyed the railway bridge in 1970, the dual carriageway went only as far as Llanfairpwll. In 2001 the remainder of the road to Holyhead was constructed and opened. Plants can be found on the older established section, but not as yet on the new from Llanfairpwll. Roads not treated with salt, unless very close to the shore and subject to sea spray, do not provide the right conditions for this plant to grow.