During the 18-day spell between the 9th and 26th there were 13 dry days, trace amounts on 4 days and 0.1 mm on 1 day. It qualified, therefore, as an absolute drought. The terminology is no longer used officially, it required a minimum of 15 days none of which was credited with 0.2 mm (0.01 inches), or more (the rain day). It was introduced by G. J. Symons in 1887 and published in British Rainfall ¹, but ceased publication in 1968. Another term used was dry spell, this requires a period of at least 15 consecutive days none of which is credited with 1.0 mm (0.04 inches), or more (the wet day). More abstract was the partial drought that was defined as 29 consecutive days when the mean of the daily observations did not exceed 0.2 mm (0.01 inches). 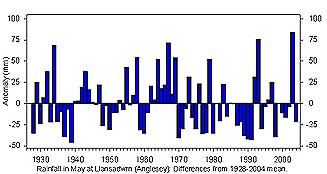 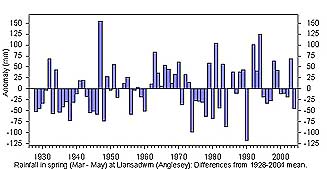 Without the records of the former Llansadwrn observers, Mr C. Panton Vivian, Mr Dic O'Connor and Mr Anwyl E. C. Morgan, this account would not have been possible.