Saharan Dustfalls on Anglesey in December 2003:
First confirmed depositions in December in the British Isles. 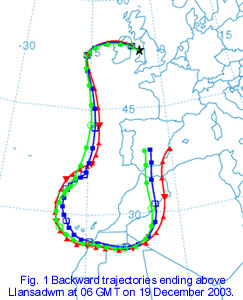 On 19th December 2003 at 0900 GMT I observed a deposition of light grey coloured dust at my weather station in Llansadwrn, Anglesey. When dry the predominately grey deposit had a faint pinkish tint. We were in low cloud fog, with drizzle or light rain having fallen from 06 GMT as a weak cold front crossed the Irish Sea. The weather had been dry from the 14th; the precipitation amounting to 0.7 mm was the first for 4 days. Following backward trajectory analysis done using the HYSPLIT numerical atmospheric model 2 3, at the NOAA Air Resources Laboratory's Ready Website, it seems likely that the dust was picked up during a dust storm over the deserts of Algeria, Mauritania and Spanish Sahara between 11 - 13 December.

A MODIS image taken by the NOAA TERRA satellite at 1110 GMT on 13 December shows dust blowing offshore from Spanish Sahara and Mauritania, south of the Canary Islands, forming a dust-plume northwest into the Atlantic. It is likely that this is the same event that led to dust being transported to Anglesey.

On the 10th December low 992 mb was filling and tracking east over the western Mediterranean towards Tunisia giving a southerly flow of air across the Strait of Gibraltar 4. On the 11th a high 1026 mb developed over the Iberian Peninsular intensifying to 1031 mb by the 13th with a south-easterly flow over the North African desserts into the Atlantic Ocean. On the 14th the high 1032 mb extended a ridge 1029 mb past the west of Ireland to give an airflow in a north-easterly direction. The high then moved east to be 1031 mb near Gloucester, England on the 15th, moving on to Cherbourg, France, with little change by 00 GMT on the 16th. By the 17th it had become established with centres over north Italy 1030 mb and Tunisia 1029 mb. At this time low 981 mb Iceland, tracking northeast, was beginning to affect the weather to the northwest of the British Isles with frontal cloud approaching Scotland on the 18th reaching Anglesey on the morning of the 19th.

Trajectory analysis followed 3 parcels of air between 3500 - 5000 m above ground in southern Spain at 06 GMT on 10 December, that crossed the Mediterranean Sea in the afternoon and the Atlas Mountains of Morocco, highest Jebel Toubkal 4165 m (13665 ft), at 18 GMT. At 00 GMT on the 11th the air at 2400 m above ground crossed into western Algeria then swept southwest to enter Mauritania at 18 GMT. Crossing Spanish Sahara, one parcel was as low as 500 m, to arrive on the Atlantic coast at 00 GMT on the 13th. At 06 GMT on the 14th the air was crossing latitude 30° N before swinging in to quickly pass the Iberian Peninsular on the 16th to be on latitude 45° N at 06 GMT on the 17th. West of Ireland on the 18th the air crossed Northern Ireland to be over Belfast at 00 GMT on the 19th. About 06 GMT rain washed out the dust from parcels of air between 1500 - 2000 m above Anglesey.

After crossing the Atlas Mountains on the 10th December, with cold dry air descending in their lee, the parcel was subjected to a Föhn-like effect. In Fig. 2 moist air at over 70% relative humidity crossed the Atlas summits at 00 GMT on the 11th. As the temperature in the air parcel rose from -15C to 20C the relative humidity fell to less than 25%. The air parcel kept near 50% until the 14th, when it was crossing latitude 30° N, thereafter cooling and becoming moister again.

The 25th December was dull with mist under uniform stratiform cloud. There was a little light rain from 06-07 GMT that washed out a trace of an orange or light brown colour dust. The University of Athens SKIRON dust model had forecast dust crossing southern Ireland, North Wales and central parts of England at 00 GMT on the 25th. This dust appears to be have been blown off the north-western African coast into the Atlantic then over Northern Ireland to reach Anglesey. The afternoon turned wet in the fresh to strong south-westerly wind: there was moderate to heavy rain from 14 GMT that continued until 0130 GMT. After a lull there was further moderate to heavy rain from 03 GMT. More streaks of dust of the same colour was observed at 15 GMT and at 09 GMT on the 26th after rainfall (09-09 GMT) of 32.5 mm. As surfaces tend to be 'washed' by heavy rainfall the observations suggest that there may, in total, have been a significant dustfall. Surfaces used for observation are routinely cleaned, or replaced, at the time of observation so that fresh falls can be seen.

On 18th December pressure was high 1032 mb in the Bay of Biscay while it was low 1022 mb in the Mediterranean. The low pressure sank south to be over North Africa on the 19/20th with slack pressure gradients. On the 21st pressure low 971 mb was in the North Sea with high pressure 1035 mb in Mid-Atlantic. The high pressure intensified 1040 mb and moved slowly south-east towards the Bay of Biscay on the 22nd and Cape Finisterre on the 23/24th. With complex low pressure 968 mb near Iceland tracking east, there was a south-westerly airflow maintained across the British Isles up to the 27th December.

Trajectory analysis followed 3 parcels of air between 2500 - 3000 m above Algeria on at 00 GMT on the 16th December. They were slow-moving until crossing into Mali on the 20th. Then picking up speed to be over Mauritania before crossing Spanish Sahara on the 21st and were over the Atlantic coastline at 14 GMT. Then blown rapidly north-west past the Canary Islands at 18 GMT and on to Madeira by 00 GMT on the 22nd. Past the Azores at 00 GMT on the 23rd to be at the most westerly point 28° W at noon. With high pressure moving east towards Biscay the airflow became north-easterly and brought the parcels over Valentia, Ireland at 00 GMT on the 25th. At heights between 1500 and 2000 m they reached Anglesey at 06 GMT.

A further backward trajectory was done for air arriving at the higher levels of between 2700 and 3500 m above Anglesey at 1500 GMT. This confirmed the second deposition at the start of the next longer, and heavier, spell of rain.

The deposits of dust seen in Llansadwrn on 19th, 25th and 26th December 2003 were confirmed by trajectory analysis as originating in North Africa. They are the first confirmed observations in December in almost 100 dust events on record in the British Isles (Stephen Burt 1). It is likely that all 3 dates were part of the same event. Trajectories examined show similarities fitting a pattern of dust transport to Anglesey on a south-easterly airflow around high pressure over North Africa, then westerly to the south of low pressure to the north of the British Isles.